Saint Fermin (the person- the Myth) 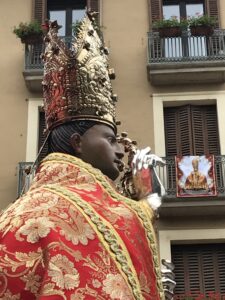 We are in Pamplona celebrating the live and death of Saint Fermin. But who on earth was Saint Fermin?

Let´s go back in time….. The first time we hear about Pamplona was in the 1st century before Christ, when Roman General Ponpey. Yes, the one who founded Pampey in Italy. He liked Pamplona as a great strategical enclave. It is located on a high plate, with a big river (Arga river) surounding it. Most important, you get to control the Pyrenees. Pompay negotiated with the locals (the original Basques) to create a defensive town.

Centuries passed and we had to wait until the 4th century for Christianism to arrive on this side of the world. You have to understand that the year 313, changed the worlds history. Milan´s edict was signed by the Emperor Constantine the first. This edict, allowed the freedom of religion in the Roman Empire. The edict, was a huge change, not anymore the Emperor was the “God”, now the popullus, could learn and worship other Gods. At this time, is  when a Bishop from  France (Saint Saturnine) arrives to Pamplona to teach about Jesus Christ and the New Testament. By the way, Saint Saturnine is the  Patron Saint of the city. Saint Fermin is the Partron Saint of the state of Navarra.

Saint Saturnine arrives to Pamplona ready to convert and baptize all the locals. Unfortunatelly for him, he was called to explain all about Christianism to the Roman General in town, General Firmus. Firmus was not very happy with this new religion, but as we already had  signed Milan´s edict, he had to allow the Bishop to spread the word of Jesus. The General, said, ofcourse you can baptize freely in town, but, I am going to place just one rule. One simple rule….. “the first person baptized in town will be decapitated” so please who shall be the first one? At the beguinning no one dare to go first…. Until a young man (32 years old) offered himself to be Baptized. Already Chirstianized, he went to talk  with General Firmus and said “Dear father, me, your son has been the first one to be baptized in Pamplona. Are you really going to cut my head off?”  .  Firmus didn´t hesitate much, and there went the head of his first born son.

As you can imagine, the name of the son was Fermín, and as he died in the name of God, he became  a Saint, Saint Fermin. This is the reason why we dress the way we do during the festivities. We pay tribute to his holy life dressed in white and we wear the red bandana so we don´t forget the way he died.

Well, if I have to  tell you the truth, maybe this story yoou have just read, it is not 100 true. Yes Saint Saturnine came to town to Baptize.It is also true that he baptized the 1st locals. But the issue that Firmus decapitated his son Fermín…..Well maybe this is what us ,locals, like to explain. The truth is that Fermín was baptized and he became a Bishop in la Galia (today France)  . We know  he was beheaded in Amiens. A small city in the north of France. In fact he is buried there. Here in Pamplona we have a Relic, a small bone that is held inside the sculpture you will find in San Lorenzo´s church.

I hope you have learnt a bit about Saint Fermin!!!! 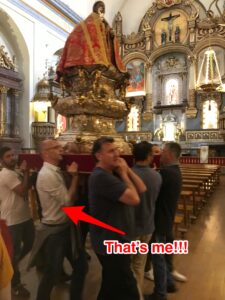 The day I was honored to carry Saint Fermin. I still have gussbumps!!!!