The most beautiful church in Pamplona is San Saturninos´ 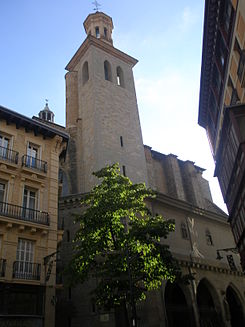 When you are facing the City Hall and the City Hall square turn your head to the left and you will see 2 medieval towers, that is San Saturnino’s church or San Cernin’s church (yes, it has 2 names).

First of all, who was San Saturnino?. On the 4th century AC, was when roman emperor Constantin the  first accepted freedom of religion for the Empire. It was the year 330 and it was called Milan’s edict. This gave christianity the chance to be public and started to build communities. It was the moment when priests started to travel to convert people and baptize them.

San Saturnino was from the south-east of France (Provence). He crossed the Pyrenees by the Mediterranean and Christianized all the Pyrenees from Barcelona to Pamplona. In fact he was the one who baptized our so loved San Fermin.

After his job was done he went back home. The roman general at that time in his home town was not happy about the issue of Christianity, so he made San Saturnino pay tribute to Jupiter by killing a bull, he answered that Jupiter was not his god so he didn’t sacrifice the animal. The roman general  was mad at that and said: “if you do not kill the bull, then the bull will kill you, so ask your god to help you”. At the end San Saturnino died killed by this bull and this is why when you see and image of him he is normally sited on top of a bull.

About the church. At the entrance you will see a gothic arch decorated with the Final Judgement, you will find people near Jesus, well dressed and happy, those are the good ones. You will also see people burning in a pot, naked, those are the bad ones. Once you enter the temple you will find two different spaces, in fact you are not in one church you are in two churches, because there are two consagrated main altars.

When you enter the temple, you find yourself in  a 15th century gothic church. On your left, at the main altar, you can see San Saturnino sitting on top of a bull. This side is almost not ornated, the gothic style looks for spirituality, introspection, quietness. Check the floor, those wooden panels were tombs. Don’t panic, nobody is buried there any more.

The other part of the temple, just in front of you is baroque from XVIII century. At the main altar you will find our Lady of El Camino “The Holly Mary of the Way to Saint James”. The baroque style is all about light, color, gold …. At that moment, Christianity needed to show that it was the brightest religion and for sure architecture resembles that.