What to pack when you visit Pamplona during San Fermin? Only White and red!

And it’s not a myth!

You must wear only white and red when in San Fermin.

But why?! a lot of friends and clients ask me!

Doesn’t this “fashion rule” only apply to the Encierro runners?

Everyone in the city during that week should be wearing white and red.

Unless you want to stick out like a sore thumb and feel completely left out during the festivities!

But why?! they insist…

And that’s when I sit them down, pour a good glass of Rioja and start telling the story of Saint Fermin.

Ready for it? (Sorry, but I’m afraid we’ll have to share that Rioja when you visit us in Pamplona!) 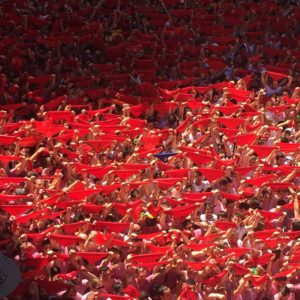 All in white and red

Why does the entire Pamplona wear white and red during San Fermin?

Let’s go back in time.

We are now in the Pamplona of the 4th century AC.

The small roman township that was Pamplona back then was first discovering Christianity from the hands of a French priest by the name of Saturnine (Saint Saturnine who is the main patron saint of Pamplona today).

Saint Saturnine had one goal in mind: to Christianise the locals and rid them of roman pagan influences.

As you would imagine, the roman General in charge – General Firmo – didn’t like the idea one bit.

But, to prove that the open mindedness of the roman empire towards this new religion, he struck a deal with Saturnine.

“Fine, Christianise away, if you must” he said in his own words… “But to leave no doubt as to who is the boss here, I will decapitate the first person who gets baptised in Pamplona. Any volunteers? “.

No one was keen to be the first convert to Christianity.

Yes, you guessed it right.

His name was Fermin.

But Fermin was no ordinary local.

Fermin was the son of the roman general.

Did that deter Firmo from carrying out his threat?

He was a very stubborn man.

“My son, if you chose to be the first Christian in the city of Pamplona you will not be spared. I will decapitate you as I ordered”.

And so he did.

Firmo cut his own son’s head.

And his courage is remembered today throughout the world every 7th of July (although most people don’t have a clue as to who he is or why the entire city wears white and red!)

So, here is the why:

The white reminds us about the sanctity and pureness of this brave man.

The red bandana – you don’t need to be Einstein to figure out is the blood that poured out of his decapitated neck.

And the reason why we tight our sash on the left side is to remember that the romans also put a knife through his heart (yep, so much for fatherly love!) and so it resembles the blood from his chest.

I know… it all sounds a bit gory and but oh well! Who are we to judge tradition?

So, that’s the story.

What do you think? It did deserve a good Rioja, right?

And now, some final recommendations. 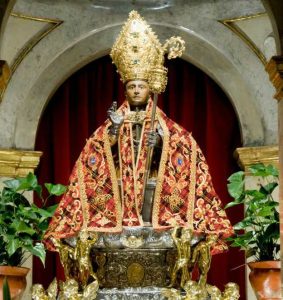 Very important! The dont’s of your San Fermin attire

Can you imagine how dirty the city gets after thousands of people party till the wee hours of the morning for seven days non-stop?

Definitely the kind of dirty you don’t want your feet to be in contact with!

Of course, our city cleaning services work relentlessly to keep it all as tidy as possible but things tend to get a little out of hand, there’s no denying it!

Leave all your branded and expensive clothing at home and only pack the cheapest white clothes you can find.

No, even better: buy them here!

You can find 5€ T-shirts and 15€ pants everywhere in Pamplona.

Because, you will need to throw them right away after the end of celebrations, believe me!

And the red bandana and the sash?

Same! They are easily found all over the city.

And make sure you tightened your sash on your left side. you wany to look local, right?

Plus, having a city dressing all in white and red makes for great pictures, don’t you think?

Do you have any other questions for us?

We’ll be glad to answer them any time!

Just shoot us an email or get in touch via social media!

Hope to see you in San Fermin (in white and red, of course!)

If you are looking for the best balconies to watch the running of the bulls, book it here!! 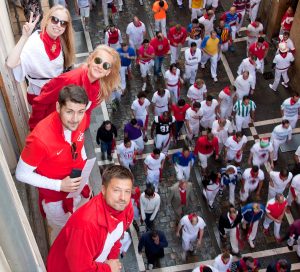