All around Spain you will find this big billboards with the shape of a bull. They are “El toro de Osborne”. One of Spains big symbols. 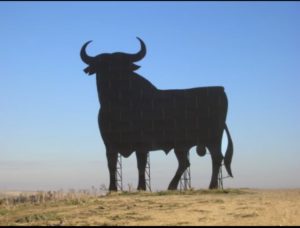 Probably one of my first child memories could be driving from Pamplona to the Mediterranean. Back then it was about an 8 hours drive. My parents in the front seats and my 4 brothers and I at the back. It was boring, hot and I hated it. But there was something we all loved. We had to count and take pictures of all the “ toro “ we could find by the road.

It was 1950´s when one of the most important liquor companies in Spain settled this billboards to promote one of their Sherry’s. It was an instant hit. The simple shape of this strong,proud and  powerful bull connected perfectly with us.  Across the billboard, you could read OSBORNE

In 1994 it became illegal to have written billboards by the roads, so the brand had to remove the name out of them. As Osborne was no more taking care of the meh bulls collapsed. But there was a popular initiative to save the bulls.  Today they belong to the Spanish government and they take care of them.

There are over 60 black bulls scattered around Spain. Here in Navarra we have 1 of them. It is at the south of Navarra on your way to Madrid. He is is a village called Tudela. By the way a great place to make a stop if you drive to Madrid.

Very well known artists have done versions of them. Painters such as Keith Haring or Manolo Valdés.

You can find them in 2 sizes, large 21 feet and extra large 43 feet, so you can imagine that they are easy to be spotted. Replicas of the Toro are easy to by founded in almost all the souvenir shops in Spain. And you will find T-shirts, flags, post cards….. It is a big iconic symbol of Spain.

Here is an article that was published at “The Local” talking about the toro de Osborne. OH one more thing, Osborne has nothing to do with the Osborne TV family you might know….