The barricades of the running of the bulls 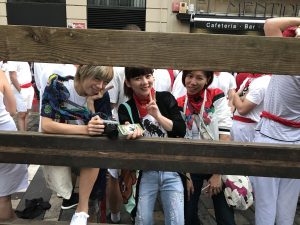 When you arrive to Pamplona during the San Fermin festival, you will find this very rustic barricades all around the city center. They are the ones that protect the runners during the Running of the bulls.

Long time ago (17th century) there were no barricades in the running of the bulls. They used wagons to prevent the bulls from exiting the path while the run. It was 1776 when the city hall decided to set the first real barricades. But it was not until 1941 when we started constructing the style of  double barricades you will find today. Unfortunatelly, two years before a bull crashed against that single barricade and started running free in the streets of Pamplona. One spectator was seriously injured.

The barricades are set only in the parts of the run where we don´t have walls. It is a LEGO puzzle of 13000 pieces. There are 900 vertical sticks, 2700 horizontal ones, thousand of screws, and many other weird items.

Each one of the vertical and horizontal sticks are marked with letters and numbers, so they know from year to year where each one goes. Some of the oldest pieces are over 100 years. The wood comes from the Pyrinaic valleys of Navarre, and normally they are pine trees, although the oldest ones are elms. They have a metallic reinforcement on the back, to prevent from breaking. We need the flexibility of the wood, and the strength of the iron.

40 carpenters set everything up at the end of June. About 40% of the barricades are fixed to the floor. But 60% is built up and down everyday before and after the run. You need to understand that the city needs to go on during the day and the barricades have to come down.

There are also 12 gates around the run that close right after the bulls go over them. This way they can not run on the other direction. This doors are not removed everyday, you will see them against the walls.

If you come to Pamplona when it is not San Fermin, you will find one set of the barricades at the entrance of the bullring and another just in front of the city hall behind the Tourist office.