Talking with Rick Steves about “Jamón”

Jamón, is almost a sacred word in Spanish cuisine. Find out about it!

Jamón, is probably, not the first thing  that pops in your brain when we talk about Spanish food. You might think about PAELLA, or TAPAS, some people will think about WINE or SANGRIA. But trust in me, once you try our ham, you will be hooked for life. 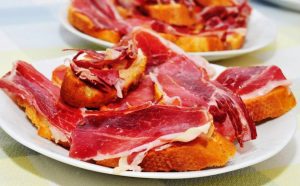 You will find small  ham  sandwiches in all the bars in Spain, I don´t care if you visit a city or the smallest village. Ham is everywhere. If you are coming  to Pamplona, I recommend you to ask for a “bocadillo” at a small shop located in the City hall square. It is called “las Viandas de Salamanca” The quality of the ham is good and the price is OK.

If you want to buy some in a Supermarket, I recommend you to not buy the pre-cut ones. Go to the butchers counter and ask for some. 150 grams will be enough to make 2 sandwiches. Go for a good one, one that is about 80€ per Kilo. You will only pay 10-12€ for 2 sandwiches. One tip, ask it to be cut ultra thin, it is MUCH better.

The reason why we eat so much Jamón, has to do with Spanish history. You have to remember that in 1492, the Muslim population in Spain were expelled by the Catholic kings. At that moment the “Holly” inquisition would put you on fire if you showed you were Muslim. So one of the easy ways to find out about your religion was making you eat ham. Muslims do not eat pork.

So if you  want to indulge yourself, you should try our ham. After you try it, you will understand why, Spaniards say that Italian prucciuto or French Jambon du Bayonne, are “Jamón want to be” LOL

Here is a radio show talking with Rick Steves (My personal travel guru) about Spanish jamón. I hope you enjoy it.