Talking with Rick Steves about Catalunia 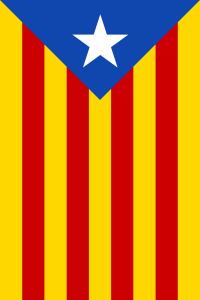 These days everybody is talking about Catalunia all over the world. What is going on with this issue? Is it safe to travel to Catalunia?

Lets start with history. You need to understand that Spain bacame a Country with the Catholic Kings in the 15th Century. Before that we had different Kingdoms. We had Castilla, Aragon, Valencia, Navarra (where I come from)…. But the Kingdom of Catalunia has NEVER existed. They have belong either to the Kingdom of Aragon (on their west) or to the Kingdom of Valencia (at their south). Today the separatist (about a 50% of the population in Catalunia) say that for historical reasons they should be out of Spain. Personally I don´t see where this comes from. So what do they really want? Well to me, it is very simple. They want MONEY.

You may wonder what on earth this means!! The problem started after Franco´s death (1975). When democrazy came to Spain, each region started asking for priviledges. Catalunia has a very large population, wich means a lot of votes. The central governement needed those votes. Both the liberals or the conservatives gave all what Catalunia asked. And they let them teach in their schools the history that they wanted. Now those kids are 40+ and they only believe what they have been told, and they still want the money coming from Spain and Europe. Guess what, the world crisis that started with the change of the millennium has stoped that money flow. And they still want their money.

Catalunia now has a big, very big debt with Spain. We are talking thousand of millions that the Catalunian politicians deny. We have found that their big independentist heroes have large bank accounts in Panama, Switzerland, Andorre and many more banking paradises. To deny their economical situation, they blame Spain, and our taxing system. They are calling for independency so they will not have to pay back all the money they owe.

Now there is all of this tension on the streets. The major international companies are running away from Catalunia and are setling their head quarters in Madrid. Even the big Catalunian companies are running away. So their economy is going down. To top all of this, tourism (which is their first industry)  is afraid to go there. So it is a hard time for the 50% of Catalunians who don´t want out of Spain.

Obout tourism, a lot of people are asquing us if it is safe to go to Barcelona. The answer is YES. In fact it is the best moment to go there. It is a moment that we will study in history class in about 30 years. And also, the prices of hotels and toristic atractions are much cheaper than before. So if you are planning to come to Spain, don´t miss Barcelona, it is as beautiful as it has always been.

Here you have a radio show with Rick Steves that a great guide, and friend, from Madrid (Federico García Barroso) and myself recorded a few days ago with travel guru and mentor, Mr. Rick Steves. I hope you enjoy it.