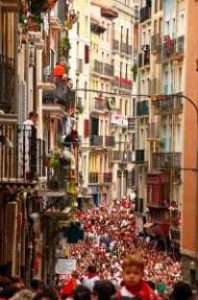 The question is: is Pamplona a city during San Fermín for children?

The answer is YES.  The San Fermin Festival is a family event as you can tell by all the strollers and child-friendly events which are found until late at night. Just go to the Tourist Information that is located at the City Hall Square and ask them about the children program. There are many things to do with kids.

We take out the whole clan so that elderly and young mix in the streets even past midnight. Outgoing aficionados and youngsters are generally respectful of anyone who doesn’t want to be bathed in sangria.

Giants Parade. The Giant’s Parade was created by the end in the mid of the 19th century and involves four big giant pairs of kings and queens dancing through the streets. They represent the world’s continents as they were seen in the 19th century. The Giant Parade takes place daily.

A great tradition that we have regarding the Giants is about the children pacifiers. Check in the hands of the giants, you will see all the kids pacifiers hanging there. It is the way we hacer to take them away. You give it to the giants, and they will dance with them for ever. 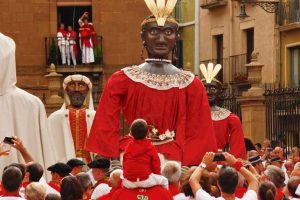 The Fire Bull that runs through the streets each nights, sparkling with firecrackers is a sight for anyone

I have 3 kids and they love the ambiance, of course we don´t take them to the party area, but there are many free events to do with children. As a security thing, when they where smaller I used to write in their arm, my phone and home address. Just in case….