If you are like me, and love wine, there is an amazing winery called Otazu just 20 minutes away from Pamplona. Great wine, incredible archiquetture, breathtaking sights and much more…. 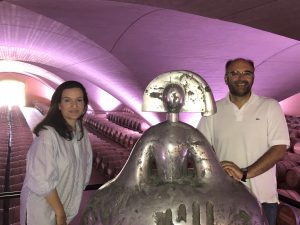 Here in Navarra, since Roman times, we have produced wine. Today I want to talk about this incredible winery called OTAZU.

The wine production in Otazu, started back in the XI century. It was the high moment of the Camino De Santiago. This is Saint James Pilgrimage, which is one of  the 3 most important Christian pilgrimage in the world.

This Camino brought many things to the north of Spain. Incredible art, new cultures,it opened peoples minds. It was amazing. The pilgrims left (and still leave) in the Camino their dreams, their lives and their knowledge. The French pilgrims left their know how in wine production.

On the XIV century is when the Lord of Otazu, constructs part of the palace you can find today. By the way, the owners of the winery still live at this palace. By the XV century, the kingdom of Navarra starts to fade, and we start having continious wars against Castile, Aragon, France… so Otazu has to construct a defensive tower in other to be safe.

Through history the lords of Otazu, have always been very attached to the KIngdom of Navarra. They have always loved and respected our traditions. On the XX century is when they understood that a winery has to be the image of their wines and they created the winery we can visit.

Mixing the tradition and modernity, we can find the old Palace, a small Romanesque church from the XII century. The XIV century militar tower, and the XVIII cellar. Specially here at the cellar, they have created these breathtaking bolts that reminds us of gothic ones, but they are made with incredible modern techniques.

Besides the architecture, the modern art collection, will blow your mind. I am personally a freak for art, and everytime I visit the winery, I learn and I am inspires to learn from another artist. You will find pieces by Julian Opie, Ai Weiwei, Manolo Valdés and sooooo many more…..

So if the architecture is amazing, and the art is sublime, what about the wine? Well It happens that it is as good as the rest of the visit you will do. One of their wines is called ALTAR and I love it, it has been  18 month in barrel and 40 more resting in the cellar in the bottle. It has the perfect balance between the Cabernet Sauvignon, the Tempranillo
And the Merlot grapes.

And to top all of this, it is just 20 minutes away from Pamplona.