BILBAO IS A MUST VISIT!!

Just 2 hours away from Pamplona you will find Bilbao. The most modern Basque city. 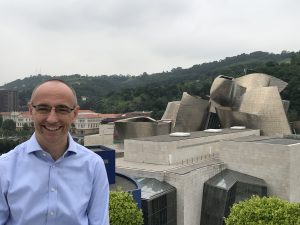 On the XVIII century Bilbao became the economical motor of the Basque Country. Heavy industry was placed by the river. The iron coming from the western part of Spain. The wood from the Pyrenees was needed for the fire at the factories. Further more, the easy connection with Europe helped to rise the economy.

Unfortunately by the end of the XXth century all of those heavy industries collapsed and there were no jobs. Just a dirty city with barely no green spaces. The city went down and down…. In the 1980´s the situation was impossible. Drugs, prostitution, violence…. And then a miracle happened. There was “1” good politician. The Mayor of Bilbao believed in his city, and he decided to make his city a good one.

At that time Guggenheim foundations was looking for a spot to open a new museum. They looked in Austria, Germany and the south of Spain. But this MAyor, heard about it, called Guggenheim and told them that his (bankrupted) city would pay for what ever was  Needed. That was it, Guggenheim said yes, and that is how Guggenheim Bilbao started.

It was not just the museum, the city and the river were cleaned. Some of the best architects in the world designed amazing buildings. Frank Ghery, Calatraba, Stark…. went crazy with the city, and you will be able to see their work.

Today Bilbao breaths new air. It is a beautiful, strong and welcoming  “young” city, that will blow your mind.

How to go to Bilbao from Pamplona.

From Pamplona you have many daily buses and different companies.  One of thm  is  La Burundesa . A great  local bus company, that has this service, but there are others. Just come to the bus station and you will find many ways to go and return in the day.

If you want to visit Bilbao and discover the Guggenheim museum of modern art, follow this link and book now a one day excursion to Bilbao. 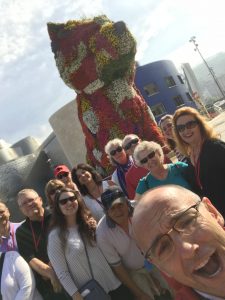